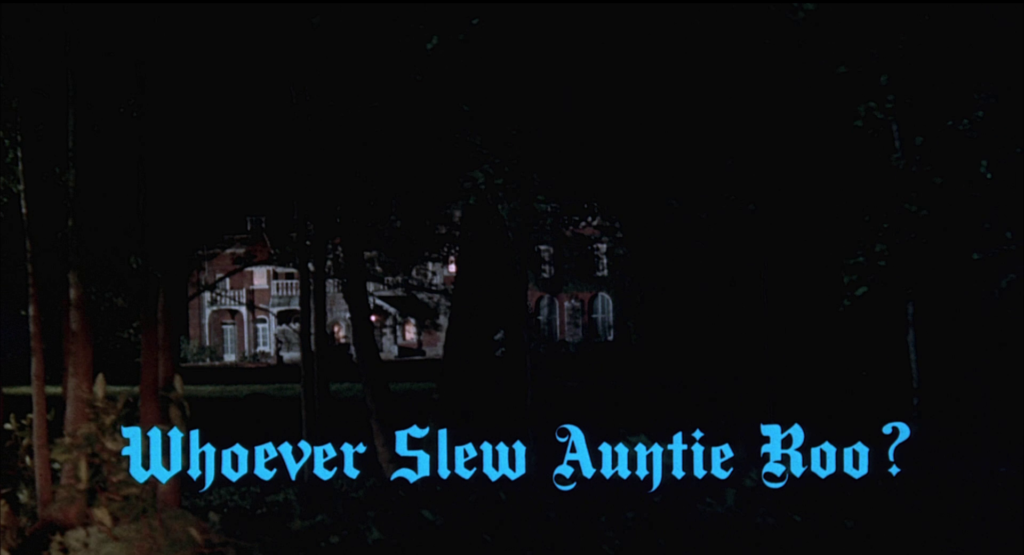 Christopher and Katy (played by Mark Lester and Chloe Franks, respectively) are troubled siblings who spend their days at the orphanage dodging the mean adults who work there and refusing to speak at all. They both hope to go to the lavish annual Christmas party held at the mansion of the nice Mrs. Forrest (Shelley Winters), but only 12 children are picked each year, and neither of them make the list. The two stow away in the trunk of a car headed to the party and sneak in anyway, which horrifies the orphanage staff, but which Mrs. Forrest has no problem with. It’s a nice sentiment, but if she doesn’t care that there are more than 12 children at her home, why can’t all of the kids in the orphanage go?

As lovely as the rich Mrs. Forrest seems — “Call me Auntie Roo,” she tells the kids — in reality, she’s disturbed, having never gotten over the death of her young daughter Katherine years ago. In fact, as we learned in the opening scenes, she keeps her daughter’s decomposed corpse in a cradle upstairs, and no one, save a few people close to Mrs. Forrest, even know the girl is dead. 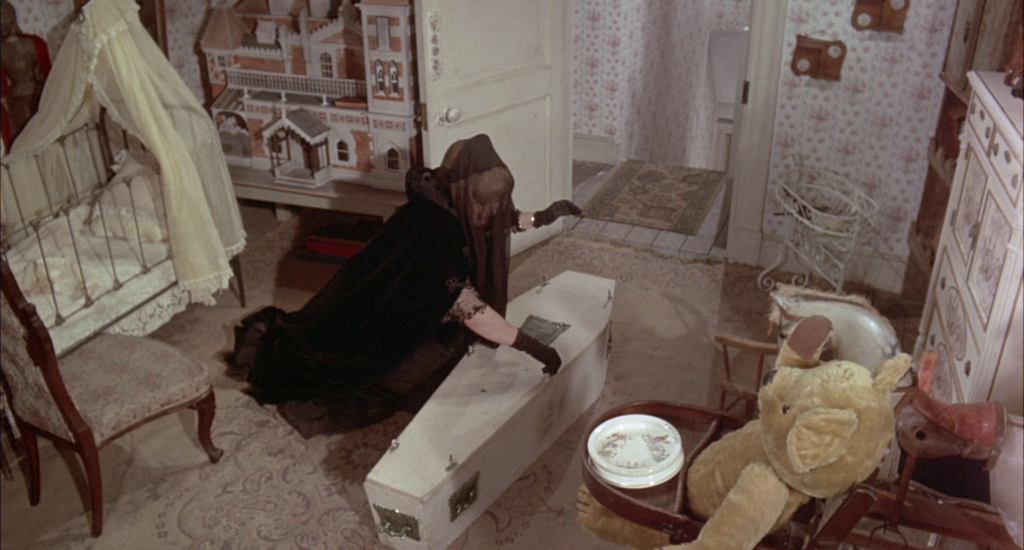 Auntie Roo is not well.

After repeated séances with no result, Mrs. Forrest starts to believe that little Katy is the return of Katherine. She wants to adopt Katy, but her brother Christopher is against it. With narrowed eyes and a lot of hate in his heart, he immediately sets himself up as Mrs. Forrest’s competition, which the older woman acknowledges but doesn’t take very seriously, not at first, but soon her mental state deteriorates, as does Christopher’s, and he begins to believe Mrs. Forrest is a witch out to kill, and maybe even devour, both children.

Based on the story of Hansel and Gretel, a fairy tale that Christopher refers to repeatedly throughout the film, Whoever Slew Auntie Roo? (1972) was originally to be called The Gingerbread House, which might have been a better title because it doesn’t spoil the ending like this one does, but what do I know? I am not a movie title scientist. Gingerbread House was later changed to the Seussian Who Slew Auntie Roo? Director Curtis Harrington objected to that title, wanting one that sounded more like the Grande Dame Guignol classic Whatever Happened to Baby Jane?, and even though posters and lobby cards with the first title had been distributed, the studio acquiesced to Harrington’s demands and a few new posters were made which read Whoever Slew Auntie Roo? They look exactly the way you’d expect a rush job would.

The interesting twist in this version of the fairy tale is that the witch is sympathetic, rather than the cannibal hag (and evil stepmother) of the original story. Much of this is thanks to the Albie the butler (Michael Gothard), who gives a fantastic performance as a man with hidden personalities. His menacing (read: actual attempted murder) of the kids pairs nicely with the way he treats Mrs. Forrest; both she and Christopher are Albie’s victims, but neither ever comes to realize it. They’re also both victims of mental illness, Mrs. Forrest thanks to the untimely death of her daughter, Christopher due being an orphan and treated poorly at the home. 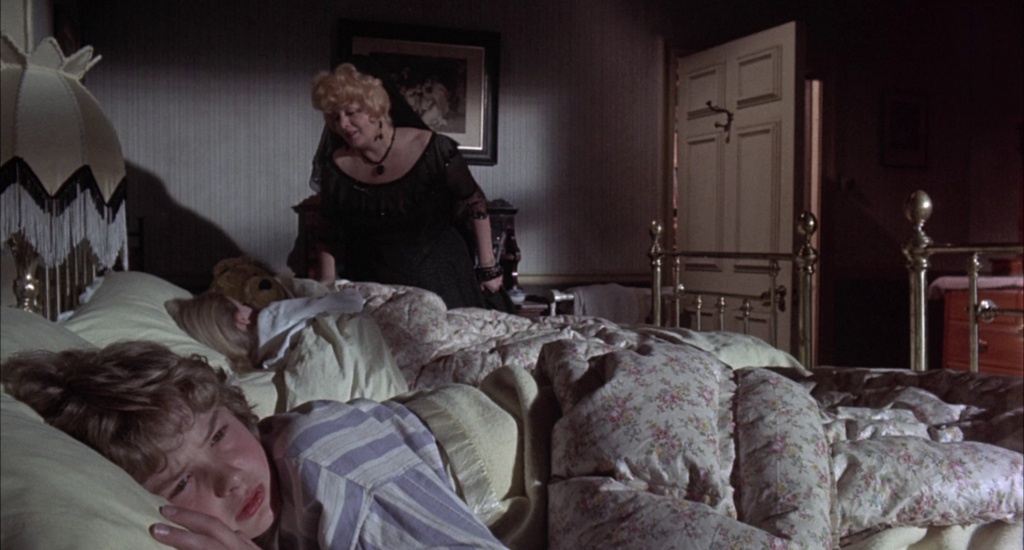 Auntie Roo was co-written by Jimmy Sangster, a veteran of Hammer horror flicks and the screenwriter behind The Nanny (1965). There is far less moralizing about how the older woman at the center of the story deserves her fate in this film than in The Nanny, however, and that alone is almost enough to make Auntie Roo the better film. But Auntie Roo’s plot is impressively thin, to the point that every character besides Mrs. Forrest and the two children seems half-written and entirely superfluous. 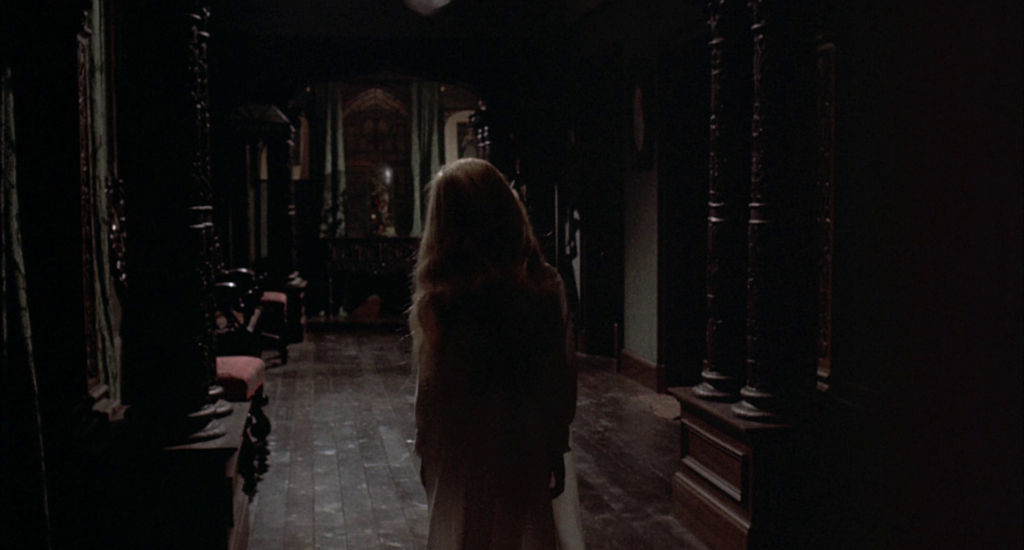 The small size of the supporting roles are often blamed on Shelley Winters, who was said to have been jealous of everyone and everything around her. Michael Gothard and Judy Cornwall (Clarine the maid) both reported problems with Winters on the set, though I confess to being baffled by Cornwall’s claim that her best scenes were given to Winters instead, because there is no overlap between the characters of Mrs. Forrest and the maid Clarine.  There’s nothing Mrs. Forrest does that Clarine should or could have been doing instead, but that doesn’t stop both Cornwall and director Curtis Harrington from telling interviewers that Winters was a jealous old biddy who was out to destroy everyone and everything.

I confess that these “she was jealous because I was getting rave reviews” and “she was old and dumpy and jealous of younger actresses, as all women are” sorts of stories never impress me much. They’re tedious and all sound exactly alike, and are far too often used by writers looking for gossip, or indulging in an impressive amount of rhetorical gymnastics in an attempt to prop up a favorite actor by trashing everyone else in a film.

Still, it’s clear from the press at the time that Winters’ image during Auntie Roo was influenced by the reputation she had garnered while filming What’s the Matter With Helen? a year prior, also helmed by Harrington. In that case, both Harrington — who is somehow always called Winters’ friend, despite the things he says about her — and co-star Debbie Reynolds trashed Winters in the press. Reynolds took her self-appointed career as raconteur very seriously, it seems, as she was happy to tell people that Winters was mentally ill (which she means as an insult), and heavily imply that she had tried to actually murder Reynolds.

None of it is even the slightest bit believable, of course. These stories only make sense when taken as a key component of the “psychobiddy” genre. Like horror rockers and politicians, B-movie filmmakers often rely on outrageous claims to sell their product, and entertainment media has never not loved equating actors with the characters they portray. Winters was a handful by most accounts, but frequently acted out because she was provoked, not because she was “crazy,” and she most definitely was not an attempted murderer, no matter how good the story sounds. 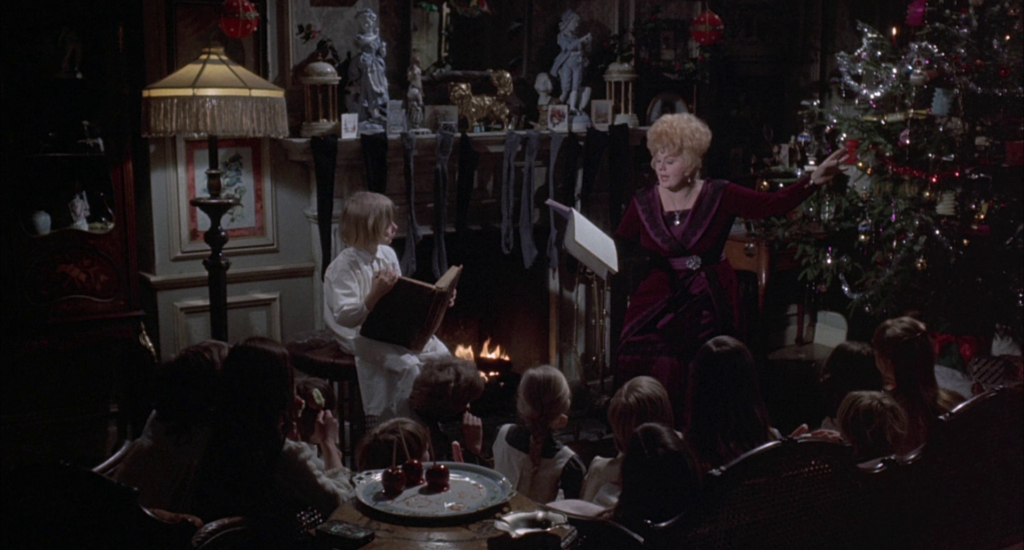 Performances in Auntie Roo are quite good, especially from the stellar supporting staff, who include Lionel Jeffries, Pat Heywood, Hugh Griffith, and Marianne Stone. The setting is gorgeous, pure Victorian cacophony with lovely Christmas décor; this would be a fine film to add to your Christmas horror movie collection.

This month, Kino Lorber has released Whoever Slew Auntie Roo? on Blu-ray in a fine-looking print. There are some artifacts original to the film’s release remaining, like errant blue bits that appear when the blue credits roll early on, plus a few hairs stuck in the frame, but it looks better than it ever has. The title screen is the “Whoever” version, but the Blu’s menu uses an original Who Slew Auntie Roo? poster, which is a nice nod to the bizarre titling of the film. The Blu-ray includes trailers, plus audio commentary with David Del Valle and Nathaniel Bell.