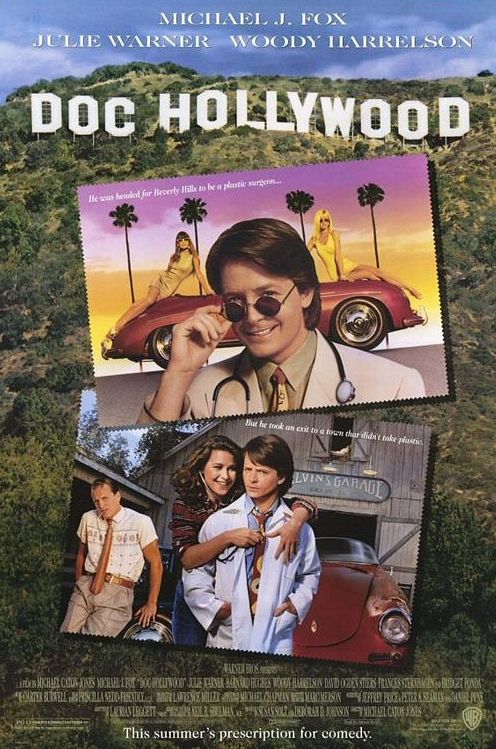 Young jerk-slash-doctor Ben Stone (Michael J. Fox), tired of his thankless job in a chaotic D.C. emergency room, heads out to Los Angeles for a job interview in a cushy, swanky plastic surgery clinic. After a bit of reckless driving and an incident with some cows, he and his classic 1957 Speedster wind up underneath a fence in the tiny town of Grady, “The Squash Capital of the South.”  The court orders Ben to pay a small fine and work as a doctor in the local clinic for community service, mainly because the town’s current doctor (Barnard Hughes) is about to retire and they can’t find anyone to replace him. Ben has no intention of staying, until the quirky locals, especially Mayor Nicholson (David Ogden Stiers) and the beautiful ambulance driver Lou (Julie Warner), start to worm their way into his heart.

Doc Hollywood (1991), despite its cynical opening scenes, is an old-fashioned, gentle romantic comedy, the kind of thing critics said Michael J. Fox should have been doing instead of Bright Lights, Big City (1988). But because we critics are fickle and flawed, reviewers weren’t keen on the kinder, gentler Fox, either, Roger Ebert being one of the few exceptions. 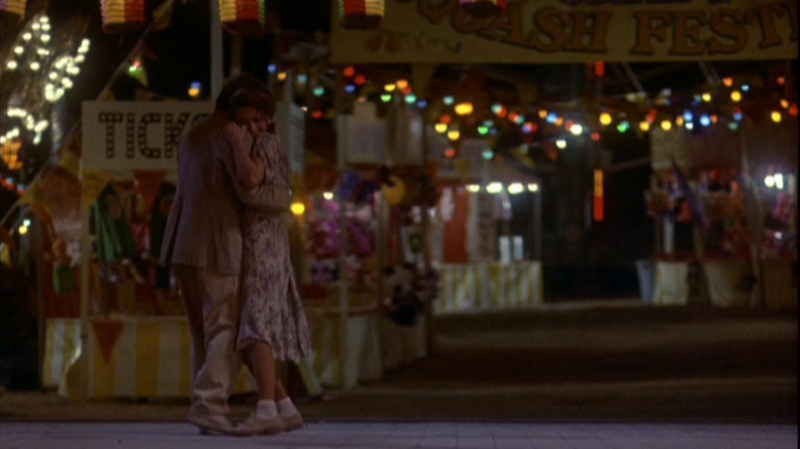 Doc Hollywood hearkens back to the days of older, inoffensive entertainment, including a scene with an outdoor late night showing of The General (1927), though there are a few moments that belie the film’s mild-mannered demeanor, mainly an early scene when Lou is introduced to us, completely and gratuitously nude. A local resident who was present for much of the filming in Micanopy, Florida, the stand-in for the fictitious Grady, later said that the nude scenes were included specifically to avoid a G rating.

Micanopy is a charming town, and apparently even today gets plenty of visitors who want to see where Doc Hollywood was filmed. Some visitors may be disappointed, though, as a few facades were put up over existing buildings, and the bar next to the garage was built specifically for the film and later torn down. Still, lots of other details, including store signs and other outdoor fixtures, are still exactly the same 25 years later. This is a pretty decent video that goes through the then-and-now of filming locations, though it may take a strong constitution to handle some of the feigned enthusiasm. 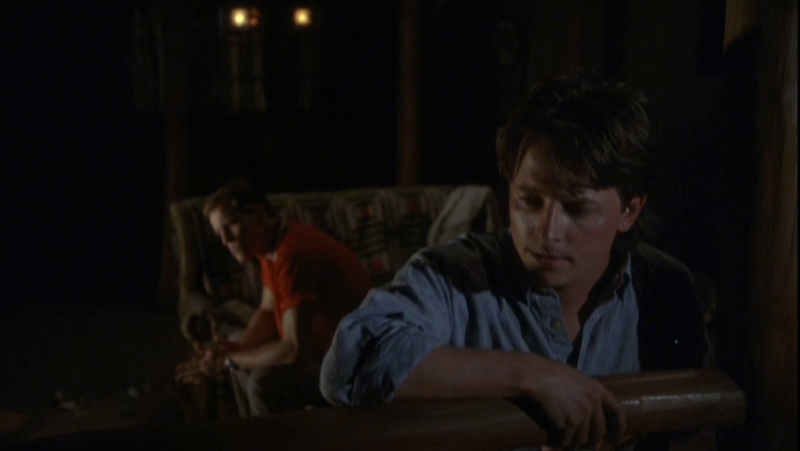 One Micanopy resident didn’t bother to feign enthusiasm during filming, however. The owner of one of the many antique shops in town tried to renegotiate payment from Warner Bros. for lost business during filming, and apparently got nothing. In revenge, she put up a large banner announcing “Antiques: Micanopy, Florida” the day before filming of the big parade scene — this is a movie made in a quaint little town, did you think there wouldn’t be a parade? — and a state circuit court ordered her to take it down… at Warner Bros’ request. Things got so out of hand (and by “out of hand” I mean “the media latched on to the story of the big studio versus the little antique shop owner”) that the Doc Hollywood production team took out a large ad in a newspaper at the end of filming to reassure everyone that they had finally worked out a deal with the antiques shop owner.

Doc Hollywood — just a random thought here, but is that supposed to be a play on Doc Holliday? — is one of the films my doofy friend narrated to me in its entirety one day, thus I had never seen the whole thing, though meant to if for no other reason than the fantastic scenery in this film. What I noticed most about Doc Hollywood 25 years on is that it is so very, painfully 1980s, which surprised me, not just because it was filmed in 1990, but that my memory held that the cultural 1980s ended in about January of 1989, at which point we entered a woogie period where we all wore bland clothing and waited for the 1990s to show up, which they did, right around September 10, 1991. 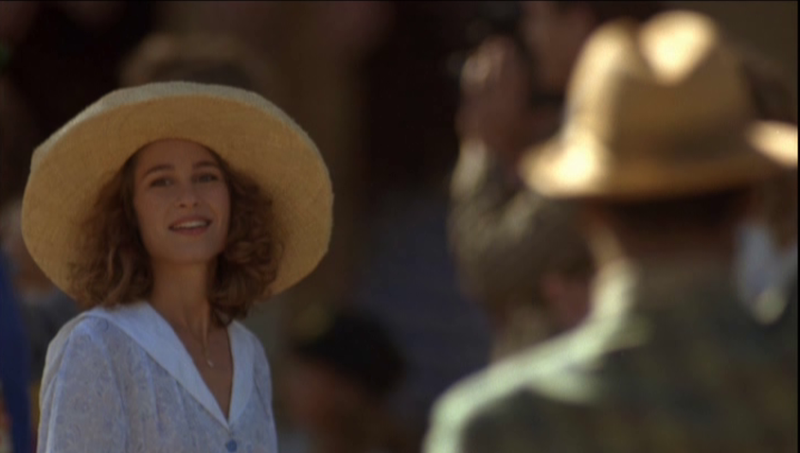 I would be lying to you if I said the film made sense, because it does not. Characters and some backstory are introduced all over the place and never followed up on. Lane the mechanic speaks English when we’re introduced to him, then starts speaking German as, apparently, a gag. What kind of gag? Who knows. Nick the mayor arrives in a squash suit, practicing for the upcoming festival, but then is not one of the marching squash in the parade. What was he practicing for? Melvin the mechanic claims he can barter for a 1957 Porsche part by offering a 1968 Chevy Nova part, and as a proud and long-time owner of a much-loved and much-broken 1968 Chevy Nova, I can tell you without hesitation that nothing on that Nova was worth trading for even the smallest Speedster part. I don’t think an entire 1968 Chevy Nova could be equally traded for any part on a Porsche.

Performances are uniformly decent, though Woody Harrelson and David Ogden Stiers are the obvious stand-outs. Harrelson and Fox were friends and spent some of their down time getting into faux bar fights which weren’t so faux; Fox got injured more than once, and if you look closely, you can see makeup covering a bruise on his right cheek in several scenes. There are lots of minor and extra parts played by folks you’ll vaguely recognize, like Helen Martin, Amzie Strickland, director Michael Caton-Jones (This Boy’s Life, Rob Roy), and Dan Bell, who played “Neil” in Wayne’s World and got left out of the “Bohemian Rhapsody” scene to make room for the partied-out Phil. 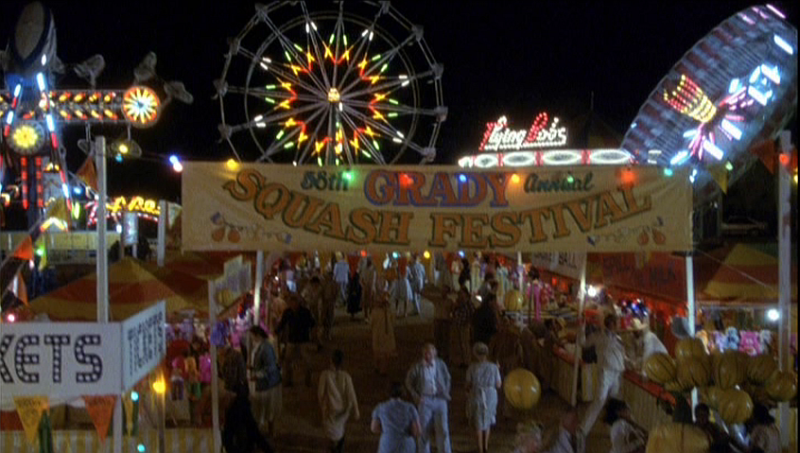 If I haven’t said much about the film itself, it’s because there’s not much to tell. The plot is completely predictable, and it’s the way the film handles the plot — charmingly — that matters. Warner Bros. has released Doc Hollywood on MOD DVD exactly 25 years after its debut, and in its proper aspect ratio rather than the stinky full-frame version that’s been floating around for years. It’s a good transfer, left soft and pastel, just as it was in the original release, with good audio, though there are some visual artifacts during the opening credits.