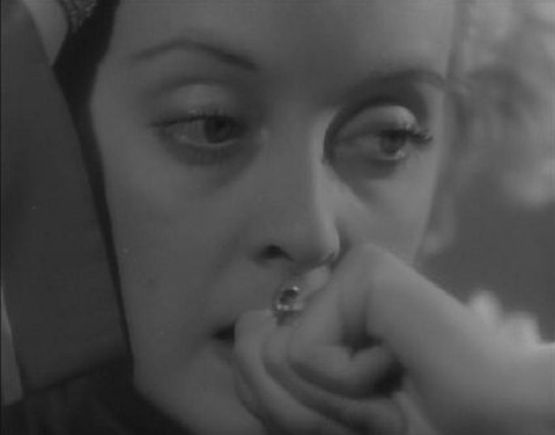 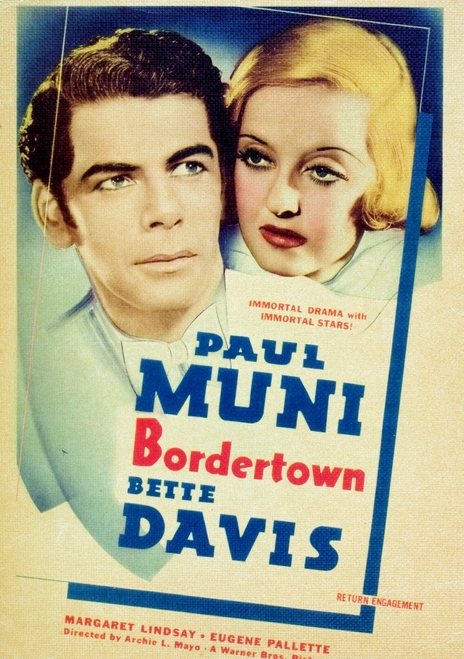 Paul Muni is Johnny Ramirez, a poor Latino living in L.A. who has just earned his law degree by spending 5 years in night school. His first real case comes when an elderly neighbor is hit by a drunk driver, the exceptionally racist and spoiled Dale Ewell (Margaret Lindsay) and her boyfriend lawyer, who was also in the car at the time. The boyfriend lawyer and judge in the case are classist, racist jerks — as is Dale, who sketches Johnny during the trial and titles the drawing “savage” — and Johnny loses the case, more out of bigotry than his inexperience. When the boyfriend lawyer continues to insult him, Johnny loses his temper and decks him. The judge and boyfriend make sure that Johnny is immediately disbarred.

Johnny (and the movie) decide that the problem wasn’t racism, it was money, so Johnny heads south to Bordertown to become rich and powerful in revenge. At first he works as a bouncer for Charlie Roark (Eugene Pallette) but quickly becomes indispensable and a partner in the casino. Meanwhile Charlie’s wife, Marie (Bette Davis), has eyes for Johnny, but he doesn’t reciprocate.

Bette does the best with what she is given in this film, which seems to be par for the course in many of the movies before “Dangerous”. Despite her critically acclaimed performance in “Of Human Bondage” she didn’t seem to get many solid roles. She spends most of her time off screen but positively exploding when she appears, which makes this a very uneven movie. Muni and Lindsay are bland and boring, but Bette and Eugene Pallette are vibrant and energetic in contrast. 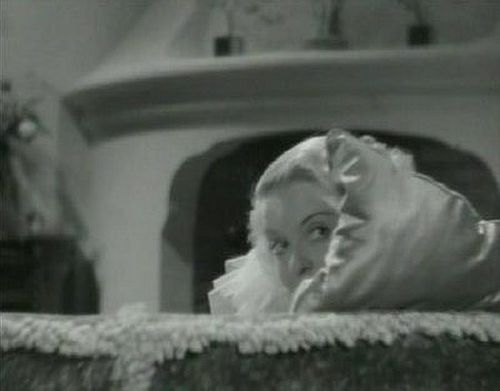 “Bordertown” is a film I have watched once, but it somehow became part of this odd half-memory that confused me enough that I felt I needed to see the film again. This half-memory was one of those weird little things you almost remember but which gets muddled after a reading dozens of film books and watching thousands of movies, interviews, and documentaries. Bette, I think on Dick Cavett’s show, mentioned that “Beyond the Forest” was a disaster not just because she was too old for the part, but because no one would believe a lady would be desperate to leave handsome Joseph Cotten. She remarked that she wanted another actor in the role that would be convincing to leave, and I think she said Eugene Pallette. I am not entirely sure (half-remembered!) but at the time I remember thinking Pallette had once played her husband before, here in “Bordertown”. At that point, something in my memory went a little nutty and I have since confused “Bordertown” with “Beyond the Forest”, and probably always will. 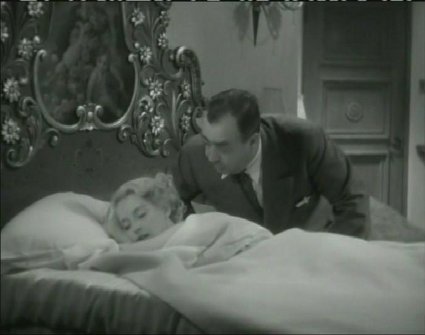 Bette’s look in the film is striking. She’s a little bloated, pale, unsteady on her feet, and just odd enough in her early mannerisms that you hardly perceive it but, when she starts to go mad, you aren’t surprised. Her wardrobe helps with her look, as she has some really nice clothes but they’re all a little off. The hat is too small, the lingerie is pretty but still dowdy, the black gown too vampy for the opening night of a bright new restaurant and casino. Bette’s character Marie is trapped in Bordertown in the middle of a desert with nothing to do. She’s a woman who is bored, dissatisfied, tired, and hungry for something new.

Out of frustration and, when the right set of circumstances comes along, Marie kills her husband Charlie and makes it look like an accident. Johnny takes the opportunity to use Marie’s inherited money to build a glamorous place where the old casino used to be, and Marie expects him to be very grateful for the chance. He isn’t, and the night the new upscale casino opens, the bitch… er, I mean Dale, shows up unexpectedly. Johnny is attracted to her and she returns the sentiment, all while calling him “savage” and “prehistoric” and fetishizing him in a really revolting way. 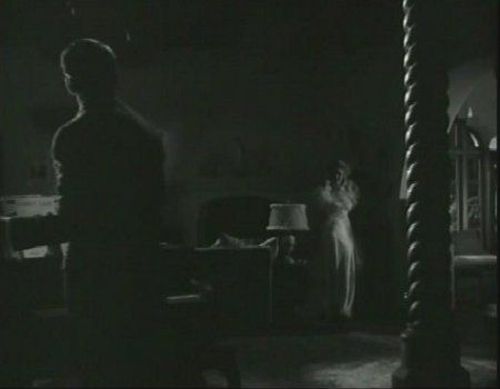 Marie discovers she’s even more trapped after killing Charlie. In an effective scene where she paces the house, wanting to leave but too freaked after committing murder, she runs to Johnny again. He has no interest in her and, in a scene which I’m positive was written for Bette to capitalize on the similar famous scene in “Of Human Bondage”, Marie decides to get revenge. She tells Johnny she killed Charlie for him, and Johnny — who has been portrayed as a good citizen, good lawyer, and nice guy — threatens to kill her if she tells anyone. Now that he knows Charlie’s death wasn’t an accident, he apparently feels no need to turn her in to the police, and would rather use the blood money to open the casino and get rich.

A few days later Marie lies to the police that Johnny forced her to kill Charlie, but at the trial she has a complete breakdown and the case is dismissed. Johnny returns to Dale who is glad enough to see him, but when he proposes, flatly says they can’t marry: “We’re from two different tribes, savage.” Johnny shakes her and screams at her in anger, causing her to run away from him and right into a moving car, which kills her. And everyone cheers! Go away, Margaret Lindsay, nobody likes you!

Johnny sells the casino and goes back to L.A. In his own words, he’s learned his lesson and should “go back to my own people.”

“Bordertown” was shown on TCM as part of the Latino Images in Film series, and according to Professor Chon Noriega who hosted the film, the original script had over 50 instances of the word “greaser”. Can you imagine? This racist, condescending dreck was the improved, more enlightened version. The film is obviously trying to elevate the image of Latinos while simultaneously making sure Latinos are portrayed as stereotypically as possible.

It’s frustrating and uncomfortable and downright sad to see such images in film, and I struggle constantly with how to approach films like this. There’s such a spectrum of opinions, ranging from those (white people) who think the outright racism of several decades ago was the right way to handle race relations, to those who say “things were different then so it’s no big deal”, to those who do not watch classic films at all because they think those outdated values need to be put away for good. I still don’t know where I fit on the spectrum. I may never know. It’s also upsetting to me in a selfish film geek way because Bette and Pallette’s performances are lost in the middle of a very problematic film; isolated, their performances are worthwhile and entertaining.

Given the last few films, this project is going to be much harder than I thought. However, the next several movies I’ll be watching are ones my good ‘net friend Louie sent me, and I can’t wait!

Somewhere online I found a bunch of “Bordertown” lobby cards, which I include for your deep, personal enjoyment. 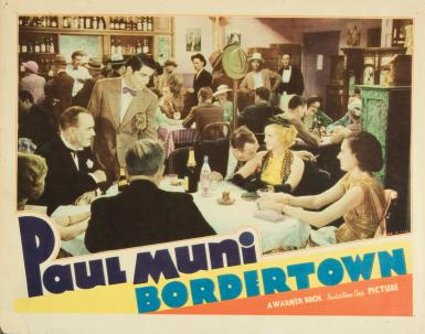 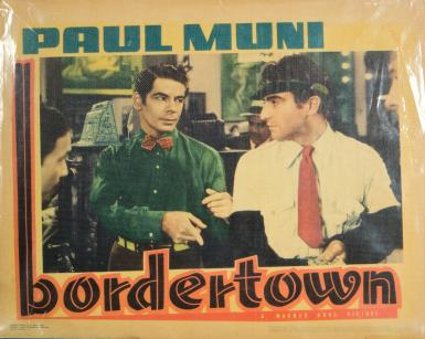 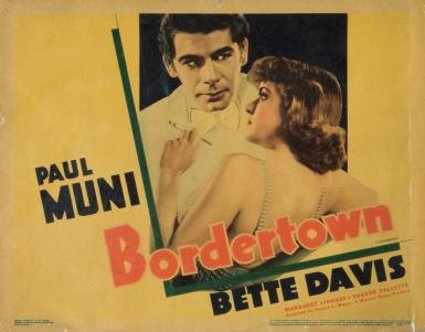 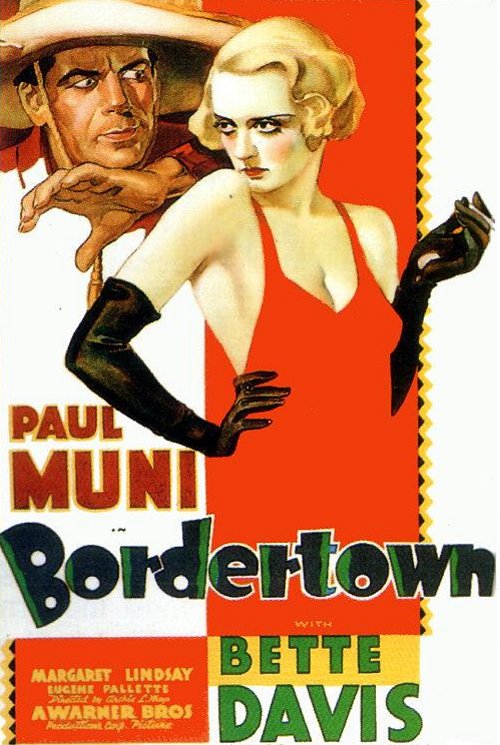