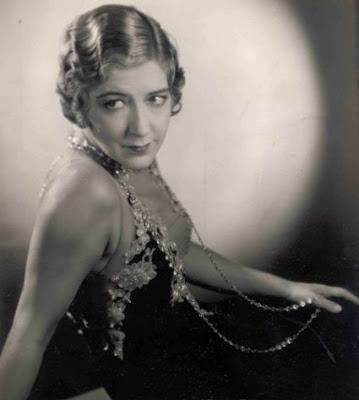 TCM, your one-stop shop for early morning pre-Codes, recently showed the almost completely unknown Night Parade (1929). It’s not so much a pre-Code as a very early talkie, however, and sadly, it stinks on toast. It tries hard to be a full entertainment experience by including song, dance, extended boxing scenes, gorgeous sets and beautiful costumes, but it falls completely flat because the acting and dialogue are so poor.

Night Parade has all the usual traits of a poorly-produced early talkie: stiff acting, improper and sometimes hilarious diction, actors glancing off camera, over-penciled eyebrows, and a thin plot that is shamefully stretched far beyond its maximum capacity. One gets the impression that early talkies based on stage plays took out the best parts and tried to breathe life into the piecemeal remains by shouting all the dialogue. Shouting is an emotion! Scenery is delicious!

I have no idea if this is true or not, but it seems as though the really daring, outrageous art deco sets didn’t appear in Hollywood until the talkies came in. Despite the art form officially beginning before talking pictures, I haven’t yet seen any of these intense, urban designs appear in silents, although Metropolis comes close.

One of the only good things about Night Parade is the evil, naughty, bad lady’s apartment. Paula, played by Aileen Pringle, is in with the mob and seduces a young boxer to get him to throw a bout. Much of the film takes place at a gala affair in her apartment, which of course was an excuse to get a little song and dance worked into the film. You couldn’t have an early talkie without song and dance.

The lobby of Paula’s apartment: 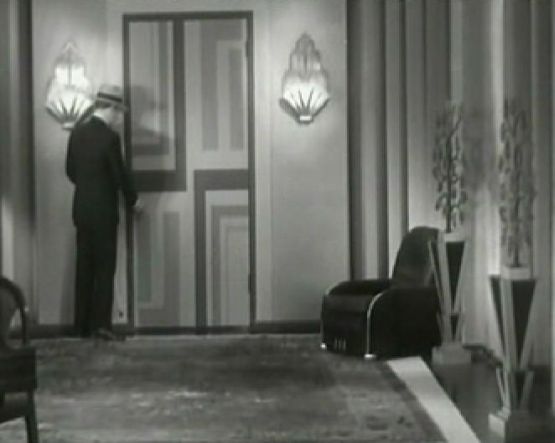 Love that chair! Here you can see a little more to the left: 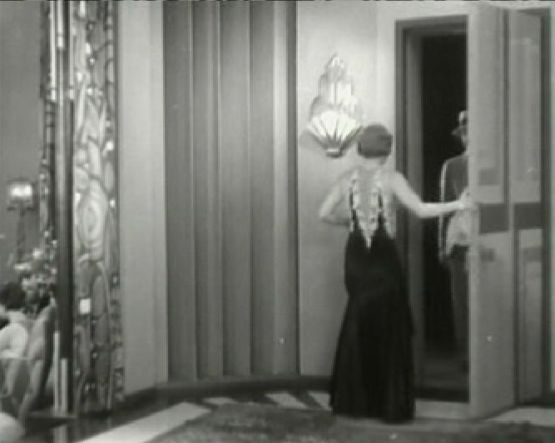 Just to the left of that geometric flowered curtain panel is Paula’s main living area. The main room of Paula’s apartment looks like this: 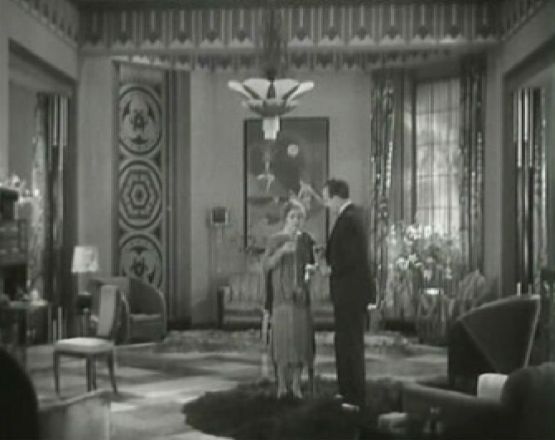 Just look at that! Wild stenciled borders on the ceiling, crazy curtains, and a wacky geometric tri-circled thing on the back left. Many of the accessories like lamps, vases, and even some of the faux floral arrangements are metal.

Here are a few close-ups: 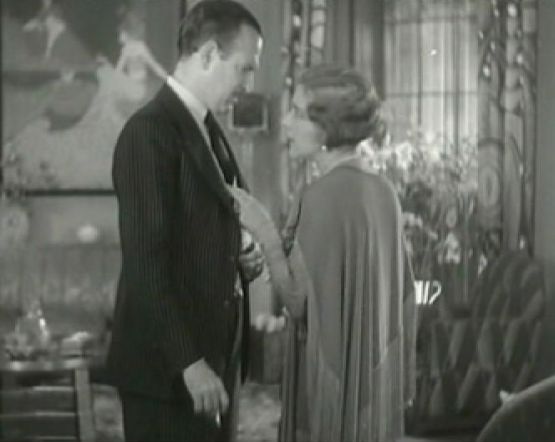 You can see the gorgeous artwork on the wall to the back left, and of course the funky patterned upholstery on the chair.

Here’s a closer look at that geometric thing on the left. By the way, that thing is a door to Paula’s bedroom. Kinky! 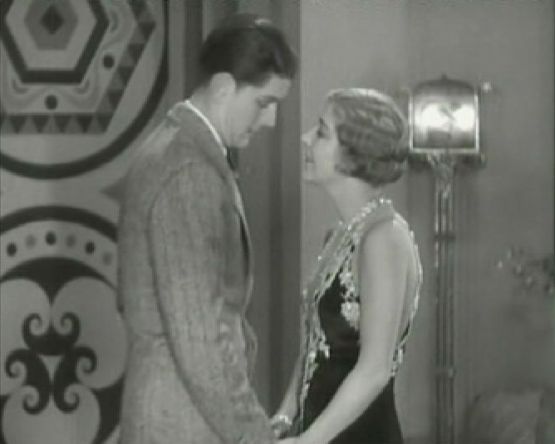 This is the inside of the door: 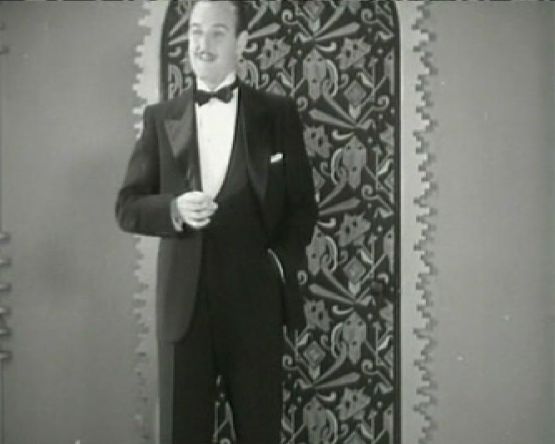 Oof. That’s a “The Yellow Wallpaper” kind of pattern, the kind that drives you mad if you look at it too long. That funky metal border is on plenty of walls in Paula’s room. This is her room: 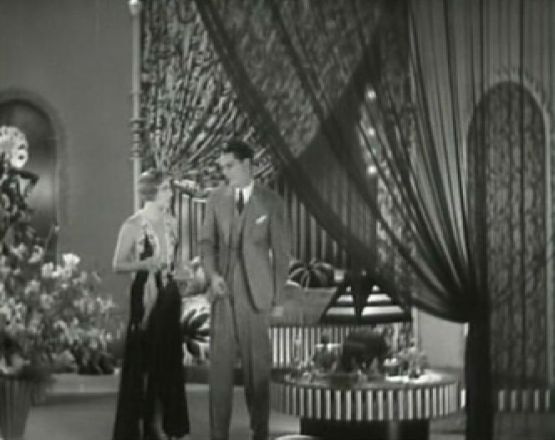 There’s nothing much I liked about Paula’s bedroom interiors except the lamp, which I adored. The day after I got screencaps for this, I screencapped “The Rich Are Always With Us”, and look what I found in Ruth Chatterton’s fabulously appointed art deco apartment: 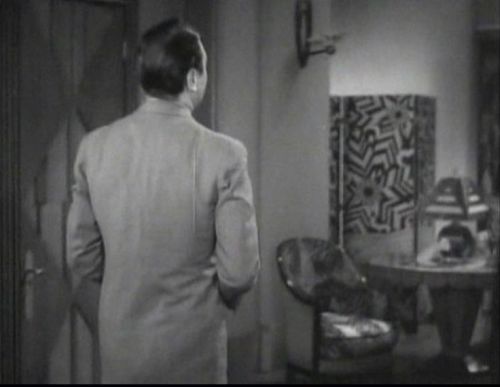 The same lamp! Please do not be distracted by George Brent’s large back, which was occasionally used to screen motion pictures on. The lamp is on the right. Who knew Aileen and Ruth shared lamps?

I began to pay more attention to props used in films thanks to this stunning article The Secret Life of Objects. If you get nothing else out of this blog entry, I hope you at least go read the article.

I gotta give a shout-out to fashion in this film. Check out Paula’s sporty little outfit here: 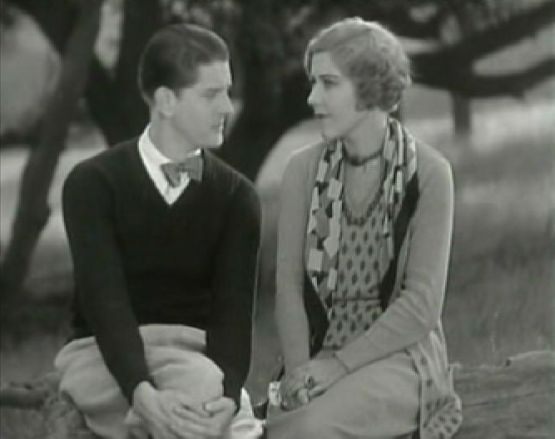 The alleged comedy relief in the film is this lady, Florence (Marie Astaire). She can’t deliver her lines worth a damn, never directly addressing anyone and instead just looking around vaguely while smirking and trying hard not to muss up her dialogue. But that dress! Yes, that does appear to be essentially a see-through dress, at least in the bodice: 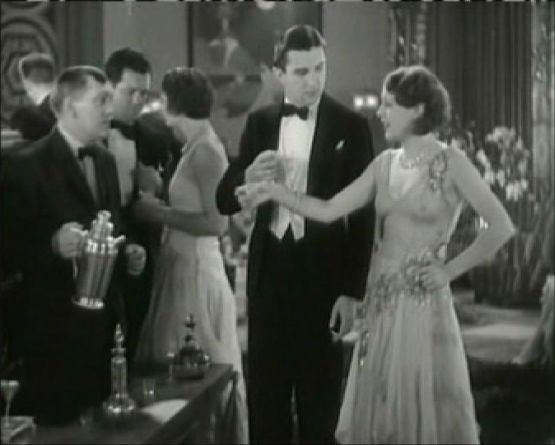 Paula’s gown, which is really lovely: 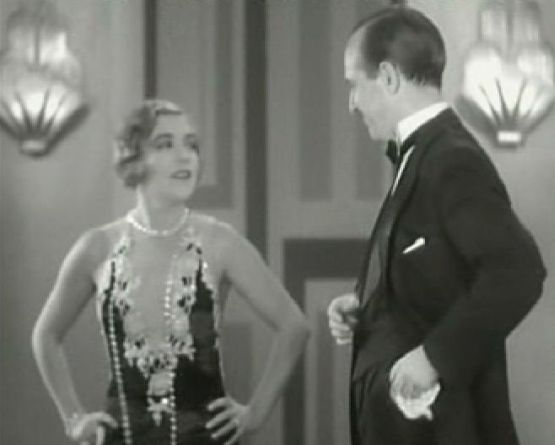 Most of the song and dance in the film was tiny, sexy Ann Pennington and her skin-tight ostrich feather dress, which spent most of the time hiked up so you could see her garters and panties: 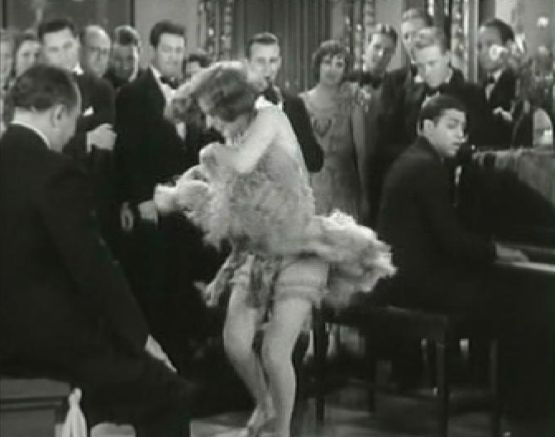 As I found out years later, that piano player on the right that looks like Oscar Levant? It’s Oscar Levant.

Aileen in a costume from “The Mystic”: 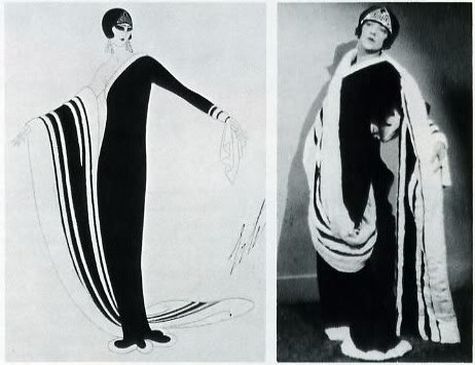 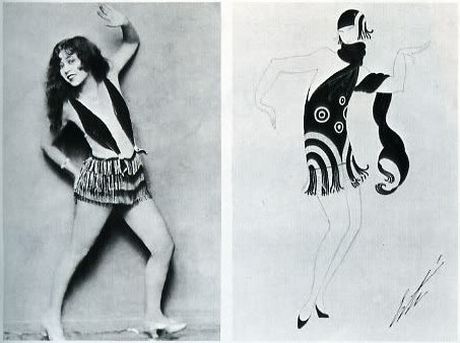 In a lot of ways, there is no such thing as a bad movie. I got hours of enjoyment out of Night Parade, even though it was so awful I eventually had to mute the sound just to get through it.