“A Christmas Carol” is a story so overdone that it’s beyond my weak powers of prose to fully describe how trite and cliche it is. I counted to 35 on the IMDb’s list of films and made-for-TV versions made of Charles Dickens’ story before I gave up. Every U.S. sitcom that lasts more than two seasons is apparently forced by law to do at least one “Christmas Carol”-based special during its run. (“WKRP” was the best.)

But a few months ago I recalled seeing a TV version with George C Scott as a kid. When Edward Woodward died recently, I moved the film to the top of my Netflix queue and finally got it this weekend. 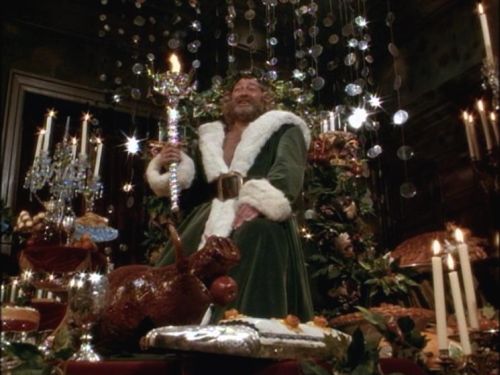 My memories of it from watching it 25-ish years ago are pretty vague. I recall being apprehensive because George C Scott scared the ever-loving hell out of me in the 1970s in the Hallmark TV version of “Beauty and the Beast”, and the character Scrooge usually scared me silly anyway, thanks to Alastair Sim’s death-like appearance in the 1951 film. But I was determined to see the Scott version because Edward Woodward was the Ghost of Christmas Present and my favorite show was “The Equalizer”. Guess that means I saw a rerun, since “Christmas Carol” was released a year before “The Equalizer” began.

Of the versions of the story I’ve seen, this one is by far the best. They didn’t take any risks with the overall presentation, sticking closely to the same visuals that previous versions had used. But Scott breathes life into a character that never seemed that real before, as do David Warner and Roger Rees and others. Some of the scenery is simple yet beautiful, and a few special effects shots are surprisingly good for 1984 television. 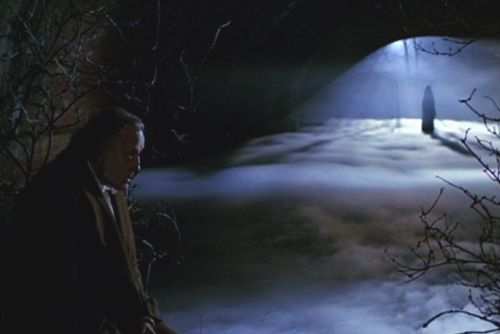 And, of course, Edward Woodward is absolute gold. He walks about on stilts like a pro and plays the boisterous, Bacchanalian spirit cleverly and without overacting. No one gives the side-eye like Edward: 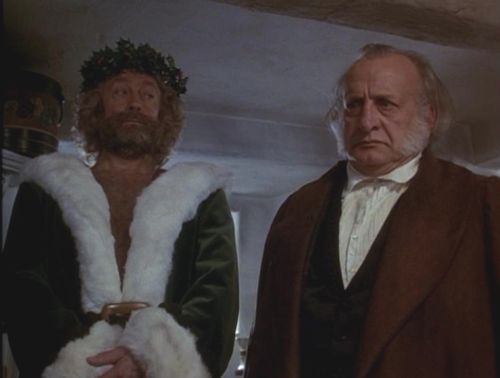 The story is (like most Dickens) ham-handed and strained, with no sense of irony that Scrooge changed only out of mild guilt and a fear of death rather than genuine understanding. However, if you’re looking for a decent version of “Christmas Carol”, I recommend this one.

Update 12/28/09: Ivan of Thrilling Days of Yesteryear sent along this Salon article about the George C. Scott version of “A Christmas Carol”. It’s a good read, I recommend it.