Why The Great Lie wasn’t made in 1933 with Kay Francis is beyond me, because this is so obviously a Kay vehicle that it’s impossible to see it any other way. The fact is, however, that it never could have been a Kay movie: it’s based on a Polan Banks novel from 1936 when both Kay and her style of movies were fading out of popularity. The fact that these light-on-plot women’s weepies weren’t all that popular in the 1940s makes it even more strange that Warner Bros. would choose this film for Bette Davis in 1941 when she was at the peak of her career. 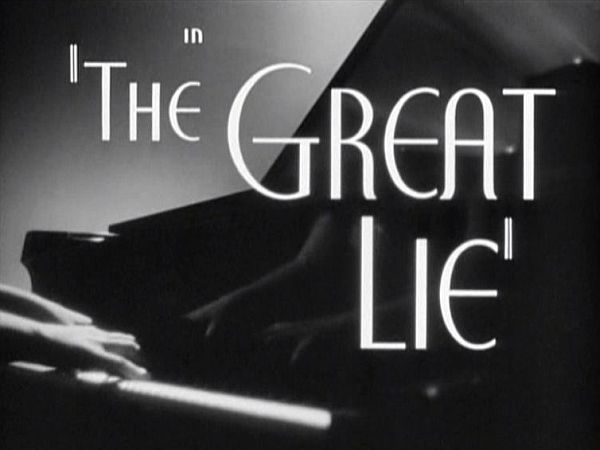 The plot is your basic unnecessarily complicated affair: Pete (George Brent, of course) marries tempestuous pianist Sandra (Mary Astor), a glamorous and world-famous diva who enjoys to party as much as he does. After a week of marriage and wild, apartment-wrecking soirees, Pete finds out they’re not really married, as Sandra’s divorce wasn’t yet final. Learning this, he takes his own plane to Maryland to talk to Maggie (Bette), the woman he was supposed to marry but didn’t, because she (rightly) thought he was an alcoholic and he (idiotically) refused to stop drinking. 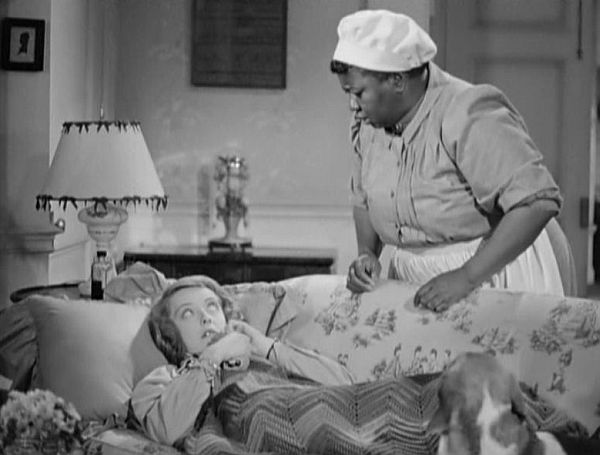 Maggie caught cold when she read about Pete’s marriage and spent a day walking in the freezing rain.

Maggie chews Pete’s ass out for showing up a week after he married just so he could whine that he’s made a blunder, which is why Pete doesn’t tell Maggie that he’s not really married, he just leaves and goes back to his wife. He tells Sandra the news about the marriage license and demands she not go on her world tour in Australia, and instead stay behind so they can get re-married.

Oh, here we go. There is no reason they can’t get married in Australia or make some kind of arrangement that would allow her to go on the world tour and get married, but no, George Brent is once again playing a man telling women what they should do. To her credit, Sandra refuses and goes on tour, but the film clearly portrays her as selfish and horrible for doing such a thing. At a later concert in the U.S., Maggie meets with Sandra, hoping to find Pete; he’s apparently gone off in a sulk and neither know where he is.

Sandra is portrayed as beautiful and glamorous… 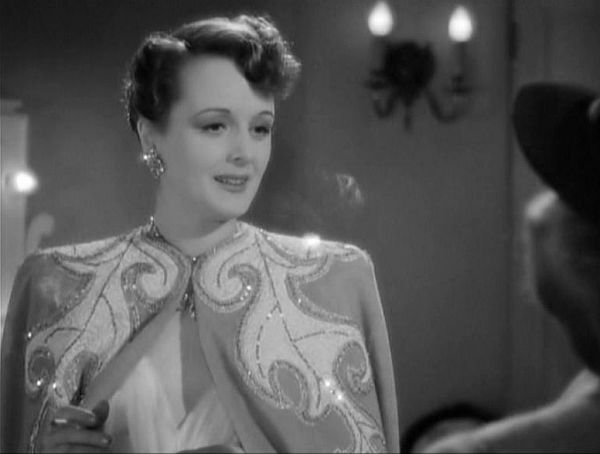 …while Maggie is made to look dowdy. 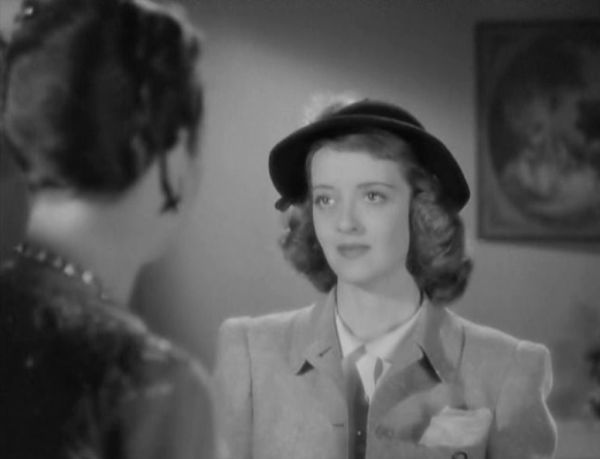 And it’s unfortunate, too, because Bette is really quite pretty. I know that’s shallow, but it’s something that has always bothered me. Bette in the early 40s was given this slightly strange hairdo that involved impossibly short bangs paired with long, side-parted hair that curled at the end. She has lovely hair, and she had similar hair in the early 1930s when she was blonded up for movies like “Fashions of 1934,” but this is different. When her hair is pulled back in “Great Lie”, she looks wonderful. In fact, here’s a cap of her just out of bed toward the end of the film when she is supposed to look terrible: 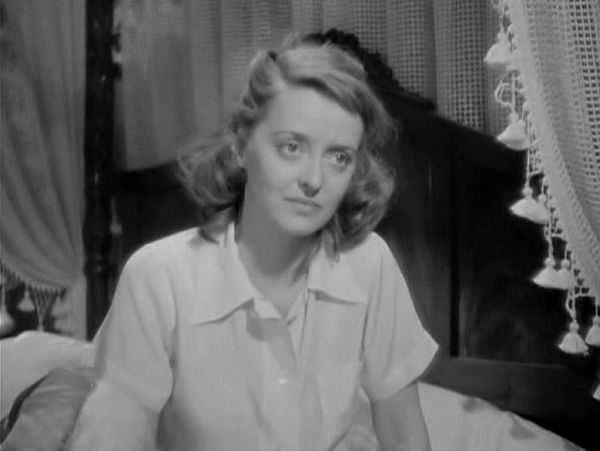 She’s beautiful, despite my subpar screencap. It’s the best she looks in the film, but we’re told she looks horrible from lack of sleep. I don’t get it at all. Her next film, “The Bride Came C.O.D.” has similar hair but longer, and it makes her look older.

Sandra chases Maggie off, and when Maggie gets home, Pete is there waiting for her. Now he tells her his marriage to Sandra wasn’t legal, so they get married almost immediately. 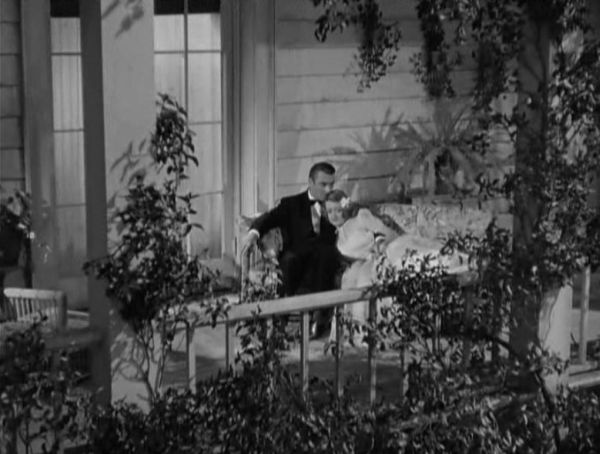 I see no way this could go wrong.

Maggie meets up with Sandra in New York and is told that Sandra is pregnant with Pete’s child, and she intends to get Pete back. That same day, Pete flies to Brazil on business for the government and his plane goes down. Presumed dead a few weeks later, Maggie decides to convince Sandra to give her the baby. (Man, this is such a Kay Francis movie.) So Maggie and Sandra wait out the pregnancy, apparently on the set of “The Petrified Forest:” 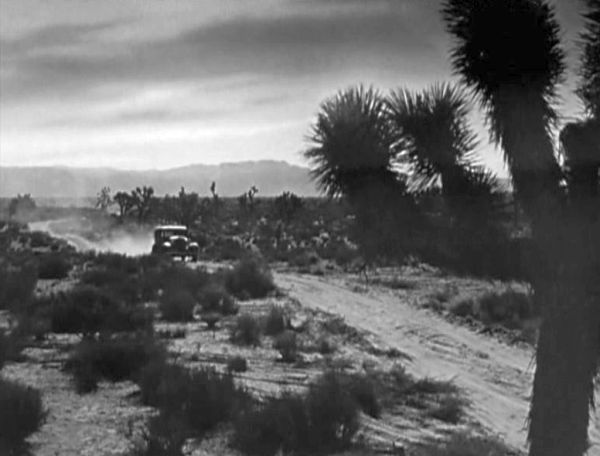 The wind, the strict diet, and the loneliness almost drive Sandra crazy, which is understandable, but it’s again portrayed as her being a diva. And smoking while pregnant was tolerated, but she was told not to eat pickles during her pregnancy. Okay then. When the baby finally comes, Maggie paces around the place like an expectant father, even wearing what in 1941 would be considered a very “masculine” outfit: 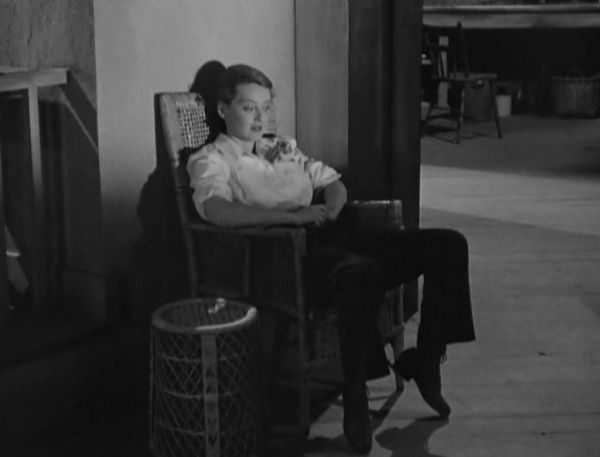 Again, Bette looks terrific in this scene with her hair pulled back. She gets the baby, Sandra goes back to her career, and then Pete is found. Did you have any doubt? Maggie lets him think the baby is hers, but Sandra shows up and insists she will reveal everything in an attempt to get Pete back. Maggie tells Pete what happened and becomes upset. During this tense discussion, Pete says things like “Shut up!” and “Stop crying or they’ll think I beat you… and I will if you don’t stop crying!” to his distraught wife. So that’s fun. Sandra is basically shown as being a horrible person for giving up her baby in the first place — she should have kept it, of course, because unwed mothers in 1941 were treated just swell — and she backs out of taking the baby because it doesn’t come with Pete. All is well.

What a mess. Beyond the dated plot — and you will never convince me that even in 1941 this plot was not dated — there are some really weird things going on in this film. It’s such an obvious programmer I can’t imagine why Bette was even cast in the role, especially since this is about four years after she famously walked off the Warner lot because of the crappy roles she had been getting. The outside shots are so obviously sets that I was distracted every time I saw them. The overuse of the opening piano solo of Tchaikovsky’s Piano Concerto No.1 in B flat minor, Op. 23 is unbelievable. In one scene, Hattie McDaniel stumbles over her lines a bit and misses her cue to walk off the porch — you can tell because the camera starts moving before she does. But then when she gestures broadly a second later, the camera swoops to the left then back to the right to catch it all. It’s atrociously amateur. They couldn’t have done another take?

Also, toward the end of the film, Maggie refers to two of her beagles as “Mr. and Mrs.” with the name dubbed out. The sound quite clearly goes out before she says the name, and when Sam McDaniel repeats “Mr. and Mrs.” a few seconds later, the same censoring occurs. So now I’m going to be curious forever about the names of those dogs!

I caught the movie on TCM where it was preceded by a Bette short for war bonds done a few years later, apparently called “The Present With a Future,” but there was no title on the print TCM showed. 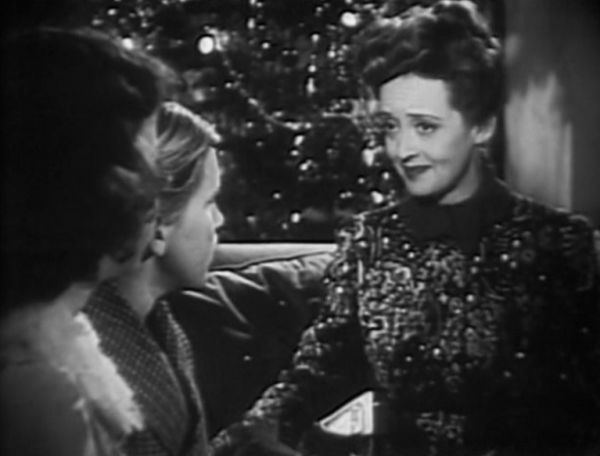 The entire short is kind of odd, as it starts out with Bette playing a mom whose 2 preteen children are given war bonds instead of gifts for Christmas. Their house is phenomenal, clearly this is an upper class family, and Bette is in a $1000.00 gown in front of a tree that is huge and 100% Hollywood. When the little girl says she wanted a bike, one wonders why she didn’t get $2,000.00 in war bonds AND a $35.00 bike. Bette is completely stiff with these kids, too, and after the sketch we see Bette in her dressing room being herself. 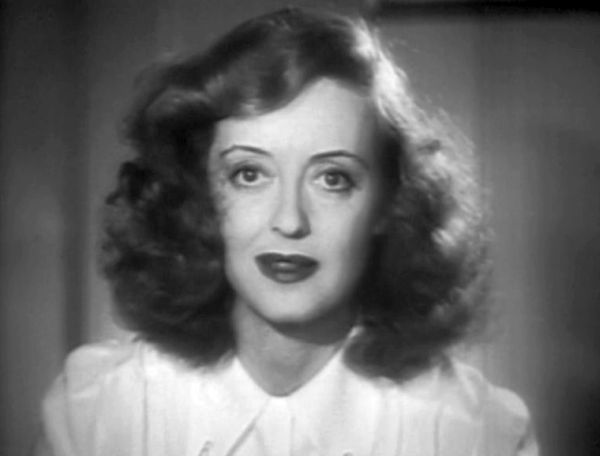 What the heck with the skit in the first place if we were just going to have Bette explain that everyone should buy bonds? Just have Bette Davis say “Look, you cheap assholes, buy some damn war bonds!”