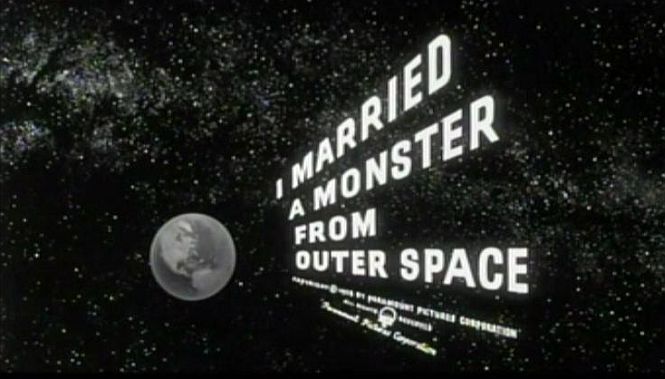 A long time ago I recorded three classic sci-fi films from TCM. For months I tried to get my husband to watch them with me, but noooooo, he was too busy with the Stick Ranger and the “Maniac Cop” and the X-Files. So I watched “I Married a Monster From Outer Space” (1958) myself, and I would like to take this moment to gloat heartily that I have seen this movie and my husband very foolishly has not. Ya had yer chance, bub.

“I Married a Monster From Outer Space” is a charming example of how 1950s-era B movies could be quite good on a very thin budget. Bill, on his way home from his own bachelor party, gets waylaid by an alien who takes over his body. After a year of odd behavior, the inability to conceive, and some dead puppies (not kidding), Marge is certain her husband is not the man she fell in love with. Soon some of Bill’s bachelor friends become possessed, too, and begin to voice their concern about the “master plan”. One night, Marge follows Bill to the forest and discovers all: An alien ship where the alien leaves Bill’s body in some kind of stasis while he goes in to visit whoever is in the ship. Marge panics, runs into a bar and tells her story, but they don’t believe her; she goes to the police station and tells her godfather, the chief of police. He calms her and says he’ll look into it. She leaves, and a moment later lightning flashes over her godfather’s face: 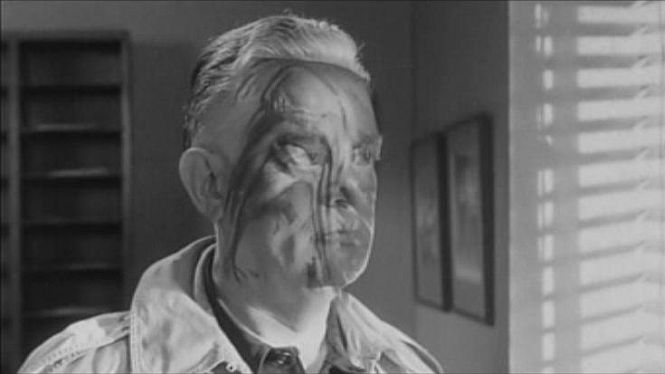 One of the men from the bar the night before decides to check out her story the next day, but 2 police officers inhabited by aliens stop him first. In a fantastic bit of editing, as a shot rings out during the afternoon altercation with the alien-police, we cut to several hours later and Marge jerking awake in fear in the middle of the night.

When one of the now-alien bar buddies dies because he couldn’t tolerate oxygen, Marge knows why, and Bill knows she knows. He reveals all: Their planet’s women have all died, leaving the men forced to find new women to breed with. However, they can’t breed with human women yet, but they’re working on a genetic fix to that problem.

Marge runs to the doctor and, thanks to what happened to the dead bar buddy, the doctor believes her story of alien possession. A group of men go to the forest and find the alien ship which contains the suspended human bodies, duplicates of which were made for a few aliens to inhabit. The aliens are destroyed, Bill returns to his normal self, and all is well in suburbiaville.

The familiar undercurrent of Cold War paranoia drives the plot of IMaMFOS, but there is an added sexual element to the film that creates a very sinister tone. The focus on distrust and deception within marriage moves this into a different realm than the standard Commie paranoia sci-fi films of the era. Bill as an alien doesn’t know a lot of things he should know — the tradition of carrying his new bride over the threshold, for one — but he certainly knows how to procreate like a human. The other buddies who become inhabited immediately want to marry, and while they need to quickly learn how to breed with humans, they also look pretty happy with their wives. Yet it is all a ruse: The men are able to fake love and affection very effectively while they, in actuality, are cold, emotionless, and calculating, caring only about procreation (sex). The aliens weren’t seeking out women for companionship, merely survival. When alien Bill reveals all to Marge, she asks if their people love. No, he says, but eventually they’ll probably learn what this whole love thing is.

Not only is this a metaphor for the classic opinion of male-female relationships — men want sex, women want love — but we also see what many middle class American women in the 1950s feared most. Marge knows she holds no real power of her own and is reliant on the men closest to her for support and care. Neither her alien-inhabited godfather nor her husband love, they merely want. She’s forced to try to find a man she can trust to save the day because she can’t do it on her own, not because she’s not strong enough or smart enough, but because she wields no authority to organize any kind of effective resistance. Fascinating stuff.

I shall begin with the punchline: I liked “Leviathan” (1989) while also hating the hell out of it.

Most people consider this one of the lesser Alien-esque films of the 80s, but I disagree to a point. There was a lot going for the film, including a strong ensemble cast, decent (if uninspired) plot, significant action, interesting characterizations, and the sets were rather amazing:

I had never watched “Leviathan” as I was avoiding all movies of the “underwater Alien” genre, thanks to seeing “The Abyss” in theatres on its original release. (I understand that the DVD release is far superior to the theatrical release. An excellent write up of “The Abyss” is here at Radiator Heaven.) I wasn’t expecting much from “Leviathan”, but was in a bit of a Peter Weller obsession (again), and I have to say the film was much better than I had expected.

Peter Weller as the slightly dim, not-at-all-leader-material Steven Beck was quite good. He doesn’t go for an anti-hero vibe with his character, instead fully embracing the slightly clueless personality of this geologist who just wants to get the hell back home. At one point after stumbling across the wreck of the Russian ship Leviathan, he discovers several of the Leviathan’s crew had died just prior to the wreck. His response is to shrug and grunt out a brief, “Huh.” Completely disinterested, only momentarily curious about it, Beck blithely moves on to what he thinks is really important: hiding the found vodka so the crew doesn’t steal it. Not many actors in an action movie would feel comfortable enough to allow their character to make a lot of subtle stupid mistakes.

The supporting cast was great; of special note are Ernie Hudson, Lisa Eilbacher, and Amanda Pays, all of whom were terrific. Hudson has one of the best comeback lines ever delivered on the big screen, and I’m surprised I don’t hear it referenced more often when people start talking about favorite movie quotes. Meg Foster as the evil corporate mind using the underwater mining crew as guinea pigs in a sinister experiment was great, even though she has a pretty limited role. Richard Crenna and Hector Elizondo gave their usual strong supporting performances. However Daniel Stern, who I usually like, was just spazzy and weird. Maybe he accidentally spent all his salary on coke, I dunno, but he was more irritating here than in the 1988 remake of “DOA.”

Now, the problem with “Leviathan” is that the end fucking sucks beyond belief, which is a distinct shame as the end starts out so strong. When the sea creature is chasing the last 3 survivors — Weller, Pays, and Hudson — Pays and Hudson are shot out of the underwater mining rig by Weller who stays behind to try to kill the creature. This begins one of the most beautifully edited underwater swimming to the surface sequences I’ve ever seen. It’s languid and urgent at the same time, a graceful panic, and it takes forever for the two miners to break the surface. It was so well done I found myself gasping for air in sympathy with them.

Down below, Weller kills the monster in a kind of silly way and escapes, too. He reaches the surface and, at that point, I was cheering even louder because Yay! Horror movie where the black guy didn’t bite it! It was beautiful, and I could have hugged the movie at that point, because I thought that “Leviathan” was going to end on this glorious high note.

But no. Of course not.

The monster shows up because it had apparently been chasing them. What? Since when? And is this the monster we thought Weller killed, or is this the previously-forgotten other monster that was down there, too? No matter, its purpose is clear: Kill Ernie Hudson. For fuck’s sake, movie. As the late great Cronan Thompson would have said, “There goes the black guy. Sigh.”

Then Weller turns all “Die Hard” and tosses a dry flare that came from god knows where into the monster’s mouth to blow it to bits, which is a really great idea since we already established little pieces of this monster can regenerate into monsters themselves. But the movie kind of forgets that because Weller needs to say something totally original like “Yippie-kay-ai, motherfucker!” Oh wait, he says “Say hi, motherfucker!” Golly, I don’t know how I got those two phrases confused.

Thank goodness the monster is really dead for real this time and the nice white hetero couple are saved. When Weller runs into evil corporate Meg Foster immediately after being rescued, he punches her in the face and walks off with Amanda Pays, both wearing huge grins. Because that’s what we’d all do after suffering for days in an emotionally and physically grueling situation we barely survived, and moments after seeing Ernie Hudson eaten by a sea monster: Smile with smug satisfaction.

In all my days, I have never been so frustrated with a movie. Never. It is going to take a very long time for me to forgive this movie.