The Star (1952) tries so hard to be the All About Eve of film, to mix real life with cinematic license, but it never quite succeeds at its lofty intentions. It’s possible The Star was conceived as pastiche, but I truly doubt it. That doesn’t mean it isn’t a worthwhile film, because it is campy and fun and sometimes ridiculous, with one incredible scene that makes the boring bits worth trudging through.

Bette plays aging film actress Margaret Elliot (sheesh, just call her Margo already). As the film opens, we see her as she stands sadly outside an auction house as her belongings are sold to pay her numerous debts. She catches her own agent leaving the auction with some of her stuff, which is hilarious in the same way Bette waiting for Anita Louise to die in That Certain Woman is. Margaret wants the lead in the upcoming film The Fatal Winter and insists her agent works on it for her, but you get the feeling he won’t.
Afterward, she heads to her ex-husband’s house to visit her daughter Gretchen (Natalie Wood). Gretchen wants to go back to living with her mother, but because of financial concerns she can’t. Gretchen also insists that the kids at school bully her because Margaret isn’t really a star, which doesn’t seem particularly likely, but Gretchen has to be put-upon and that’s her particular cross to bear, apparently. 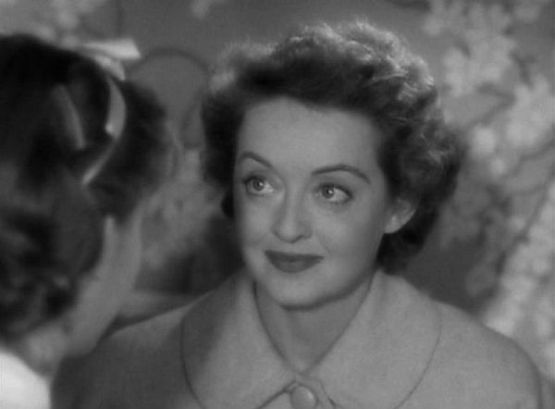 Before Margaret leaves, her ex’s new wife accosts her with the “I didn’t steal your husband, you totally lost him on your own because you weren’t a real woman” thing that was so popular in the 1950s. I challenge you to not laugh your ass off at this scene, and I will win, because you will laugh. Margaret goes home only to find a pair of leech relatives waiting for their monthly check. My, but she is beset on all sides. No wonder she ends up drinking and driving and getting her ass busted for DUI. 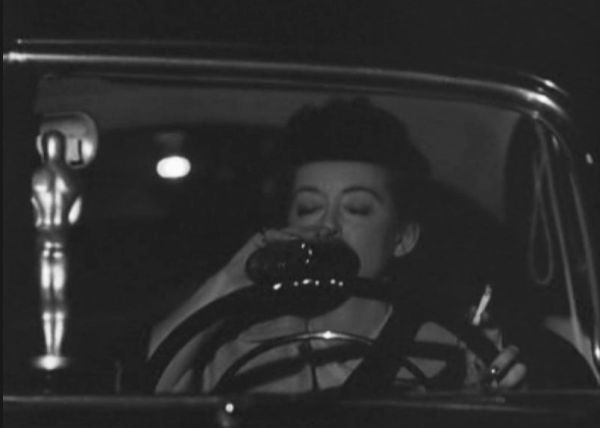 Best scene of the film: Margaret goes driving with a bottle of whiskey in one hand and her Best Actress Oscar on the dashboard. “Come on Oscar, let’s you and me get drunk!”

That’s one of Bette’s real Oscars, by the way. She does a tourist guide speech as she drives past the enormous mansions of stars, eventually ending up at the mansion she used to live at. This is even funnier when you realize director Stuart Heisler is completely earnest with this. It’s obvious he genuinely believes this is an accurate portrayal of an actress in the midst of a breakdown. Meanwhile, Bette is hamming it up so much I’m surprised she didn’t lean out the driver’s side window and scream “WOOOOOOOOO BITCHES!!!” at passersby while throwing empties at their heads.

Margaret gets arrested and ends up in the headlines, a huge surprise considering her moderate and calm behavior. She’s unexpectedly bailed out by Jim Johannsen (Sterling Hayden), formerly known as Barry Lester many years earlier, when she discovered him and made him the hot new handsome young thing at Bette’s studio. Because she’s been locked out of her apartment, she stays in the offices of Jim’s shipbuilding business. Her discussions with Jim often veer toward her old films, and usually the real names of actors are used in recollections about real films. One anecdote about being in a film where she’s snowed in at a ski lodge with “Ralph Bellows” is clearly about Ralph Bellamy, but I can’t remember what the film she’s referring to.

But I can tell you who her actress nemesis is: Barbara Lawrence! You may remember Barbara as El Brendel’s daughter in Paris Model. Okay, I remember her as El’s daughter, you probably remember her from Unfaithfully Yours and Oklahoma! She plays herself in a cameo and is a pretty young blonde spectre over Margaret’s shoulder throughout the film. The concept itself is kind of amusing, I admit. You don’t exactly get the impression that Barbara and Margaret were playing the same roles in films, so it’s difficult to think of her as Bette’s direct nemesis. 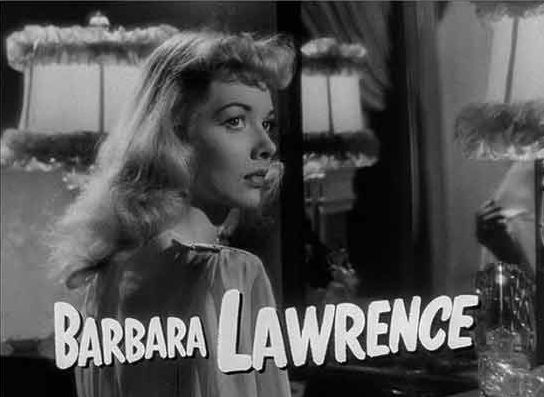 Margaret and Jim butt heads a lot because he’s a man who long ago realized that films aren’t a lifelong career for most people, but Margaret doesn’t want (or know how) to do anything else. He complains that she’s not a woman, she’s a career. Ooh, more of the women should stay at home stuff! So exciting. 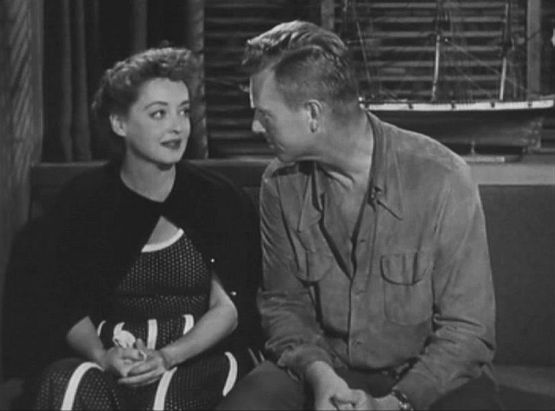 Bette and Sterling reportedly didn’t get along, and their fights do indeed have a sharpness to them that borders on the uncomfortable. At one point, Jim says something that has been dubbed over with a snotty, “Listen to your ego, it’s all you have left.” I’m going out on a limb here, but I believe what he really said was not fit for 1952 general audiences.

Even if Bette and Sterling could barely stand to touch each other, Margaret and Jim obviously have the hots for each other, and Jim is great with her daughter Gertrude. Margaret however continues her little breakdown. She steals cheap perfume from a drug store and Jim scolds her, finally convincing her to get a real job. She fakes her way through an interview at a department store, but she’s immediately spotted at the job by two bitchy housewives who gossip that she’s a “jailbird.” Margaret’s freak-out on the old bags is pretty great. 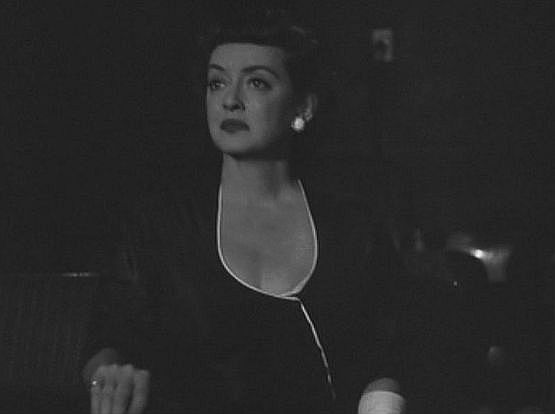 Angry, she demands her agent Harry get her an audition for The Fatal Winter. She gets one, but for the older dowdy sister. Insulted, she goes into the audition insisting on playing the sister flirtatious and glamorous, thinking she’ll get the younger lead when the director sees her terrific performance. The next day she watches the footage and realizes she was far from terrific — she was laughably rotten.

Despondent, she stays at Harry’s home where he and his wife are hosting a party that night. She tentatively joins in the party, meeting older actors who are basically forgotten, and eventually running into a screenwriter. He pitches her a script about — get this — a middle aged actress who tries to get back into films but can’t because she’s old and pitiable. Frightened (of the self-referential wankery, I assume), she bolts from the party, grabs Gretchen from her ex’s house and runs to Jim’s to live out her days as an allegedly normal woman. Ha!

The movie is a lot of fun, more so when you realize how seriously it was taken at the time. Bette garnered her 10th Oscar nomination for this film, and reviewers favorably compared the film to All About Eve and Sunset Blvd. Bette claimed she based her performance on Joan Crawford’s life, but I doubt that she was being serious, because in 1952, Joan was not that far removed from her epic melodrama days and thus not as completely washed up as Margaret is.

Sterling is very good as Jim though he is not at all convincing as someone who loves Margaret, but showing tenderness was never Sterling’s strong suit. Natalie is decent enough, but is given little to do and looks every one of her 15 years while she’s supposed to be about 12, and the result is a little jarring… 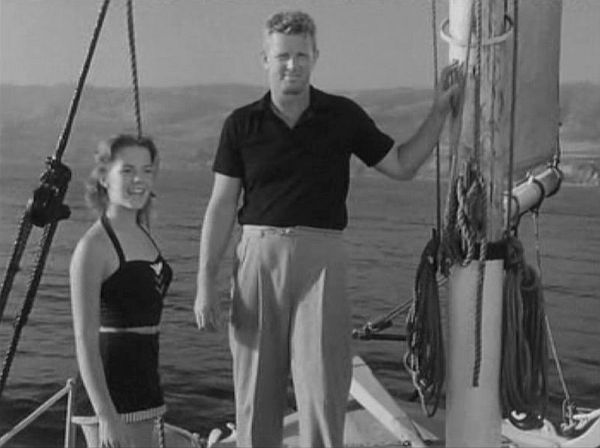 …especially when she’s in a swimsuit. During filming of The Star, Natalie was supposed to dive into the water in this scene, and when she balked out of her fear of the water, Heisler tried to bully her into it. Bette lit into Heisler and scared him into cutting the dive from the the scene, an act Wood related in a 1977 AFI tribute to Davis.

The Star comes at a strange period in Bette’s career. After All About Eve, she got movie offers, but the films weren’t of the calibre she was used to. Some were good, some were bad, and the brief boost from AAE dried up after The Star. It was three years before she got another role, and soon after that she began to work in television and taking only the very rare good film roles offered. Tomorrow, we’ll visit another one of her 1950s television appearances.