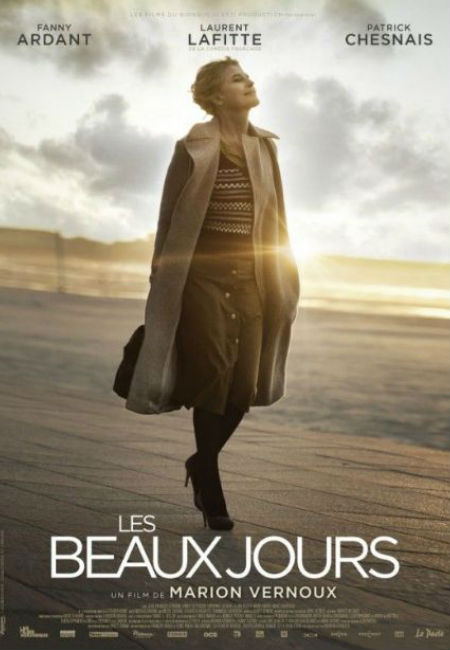 Caroline (Fanny Ardant) is a newly-retired dentist, restless and on edge. Her daughters, equal parts obligated and exasperated, give her a trial membership to a seniors’ club called Bright Days Ahead. Caroline, however, has trouble fitting in; despite the club playing host to the most youthful group of sixty-somethings you’ll ever see, Caroline feels and looks even younger than the other members, and bristles against her new identifiers: Retired. Senior. Old.

Bored and lonely and still steaming from her husband’s (possibly imagined) slight that that caused her to retire early, Caroline finds herself attracted to one of the club’s teachers, Julien (Laurent Lafitte). He’s attracted in return, not to mention an unrepentant womanizer in his late 30s; in no time, their affair is launched. Meanwhile, her hapless husband Philippe (Patrick Chesnais) continues to be aloof, in part due to unspoken tensions, but mostly because the couple take their marriage for granted.

Bright Days Ahead is a charming, sunlit romance without substance, pure entertainment product content to pander to the Baby Boomer crowd and little more. Still, the film hardly wants to alienate any demographic, and to that end, it is very careful to never reference anything prior to the 1970s. Life experiences, memories, even fashion date back no further than forty years, as though no one in Bright Days Ahead had a childhood. But the times, as the film says perhaps a little too often, they are certainly a-changin’. A scandalous older woman in 1967 was 42 years old; nowadays, she’s 60. And isn’t that something?

To make its point, Bright Days Ahead liberally quotes other films, but is so feather light itself that it almost completely dissolves when another movie is referenced. Melina Mercouri’s Topkapi laugh, Mrs. Robinson’s famous stockings and more pepper the film in moments that are amusing, yet fail to ground Bright Days Ahead to its proper cultural context, instead highlighting the film’s insubstantiality. The lack of emotional depth frees the film from being expected to deliver significant consequences, but it also prevents it from delivering any kind of significant impact.

As a character study, the film holds interest, though Caroline is a complicated woman only partially drawn. Too little insight and a lack of information keep the audience from ever fully engaging with the film, and in the few scenes where background is hinted at — the matter of one daughter’s anger, or the case of the excessive tooth whitening — the emotions never feel like they come from anywhere but a script. Bright Days Ahead is a moderately entertaining diversion, a film absolutely determined to be as inoffensive as possible, and which proves that there is such a thing as too many walks on the beach.