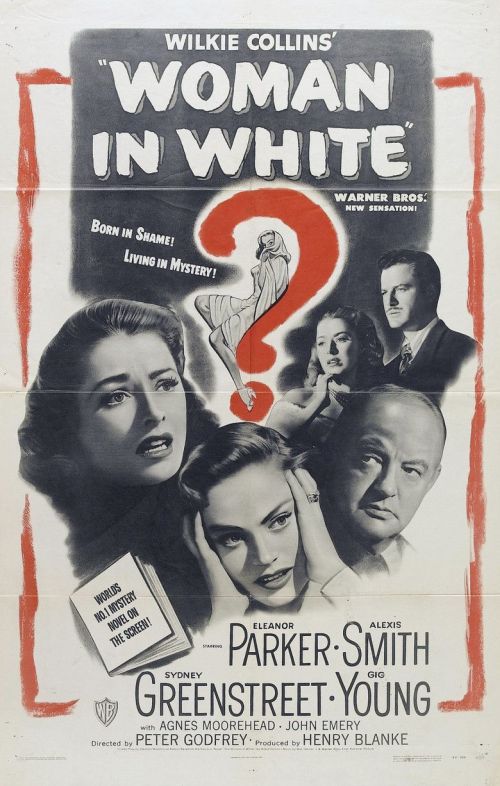 Based on Wilkie Collins’ groundbreaking 1859 novel of the same name, Warner Bros.’ The Woman in White mixes old-fashioned horror with postmodern noir themes to create a unique cinematic adaptation. The beautiful Eleanor Parker plays the dual roles of Laura Fairlie and her long-lost cousin Ann Catherick, the titular woman in white. When the handsome young artist Walter Hartright (Gig Young) travels to the Fairlie estate to teach Laura and her good friend Marian (Alexis Smith) the finer points of painting, he discovers the ethereal Ann on the same road, heading for the same destination. She’s scared off when the stone-faced Count Fosco (Sydney Greenstreet) arrives on the same road, looking for her. Walter settles into the Fairlie home but immediately mistakes Laura for the woman on the road, but Laura doesn’t know who that could possibly have been. Soon, Marian and others piece together the vague memory of a young girl who used to live at the home a dozen years prior, though none know why she’s languishing in the shadows outside the estate.

Count Fosco does, though, and so does Laura’s uncle, the fussy hypochondriac Frederick (John Abbott, practically twisting himself into knots to steal his scenes). A sinister plot involving blackmail, brainwashing and abuse emerges. Meanwhile, Marian falls for Walter, Walter falls for Laura, but Laura is already promised to the unappealing Sir Percival (John Emery), who may be involved in Count Fosco’s repulsive plans. 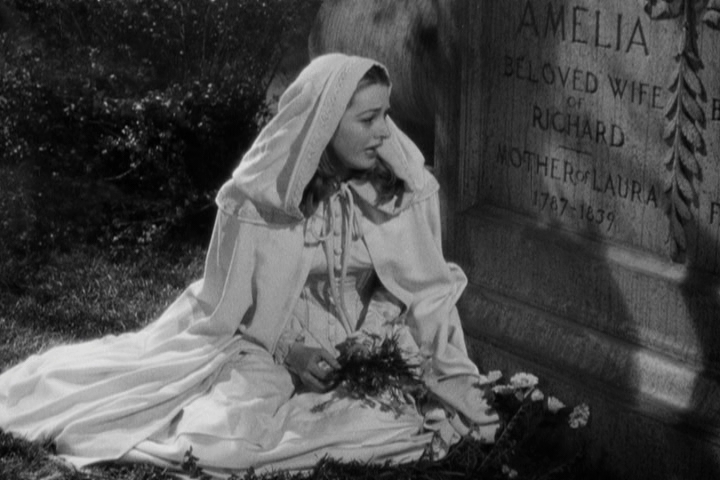 Much was done to streamline the original novel into a script that would run under two hours, and that adaptation removes some of the more lurid and complicated moments from the book. Thankfully, much of Count Fosco’s character remains, and Greenstreet gives a tremendous performance. Fosco indulges in pretty standard banality-of-evil stuff, though it’s impressive for the time if only for the fact that the character is not German, Nazi or gay, which sounds like sarcasm but isn’t meant to be. Psychopaths in this era tended to be limited to war criminals, though films noir had been pushing boundaries a bit recently (see: Udo, Tommy, 1947). Woman in White borrows from noir itself, though is less noirish than similar period pieces such as Gaslight or The Lodger (both 1944).

Still, Woman in White is a post-Code lurid Gothic horror, and as such pushes its own boundaries within the genre, mostly through the character of Count Fosco. It’s interesting to note that the film was made in 1946 and not released until 1948, when standards had lessened to a degree; I can’t imagine Frederick’s assertion that he personally has no problem with pre-marital sex being allowed in a film in 1946. But concessions were apparently made to appease the Production Code, and by the time the useless and unstable Frederick reveals himself to be a libertine, he’s been so sufficiently coded as evil and gay that his open-mindedness is easy to overlook.  Less easy to overlook is the rather unconventional living arrangement the surviving characters find themselves in at the end of the film. It’s a different ending than Collins’s novel, and a saucier one, too.

The Woman in White is one of the first rare(ish) older films I saw on TCM when the station was still new, and it was a revelation. Naïve as I was when I saw this roughly 20 years ago, I thought this must have been an A-list film that I’d simply never heard of before. I know now that it was a programmer, certainly, and may not have even been released if Parker hadn’t become quite popular after filming ended, but even if it ended up being an afterthought, no expense seems to have been spared for the production. 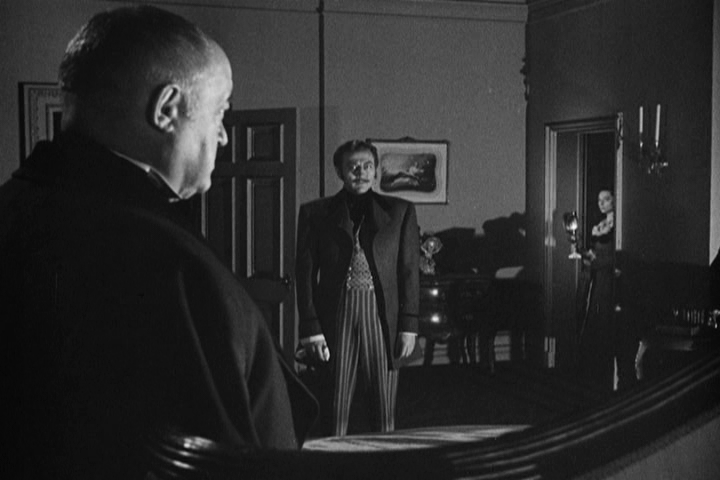 Not everyone was as impressed with the film as I was. I adore Bosley Crowther, but he is rapidly becoming my bête noire, in part for reviews like this one, where he calls the film an “antiquated dud” and labels Fosco as lacking psychological depth.

The depth, which I maintain is there, is in his reasons for his behavior, not the behavior itself. When the hypnotism starts, Crowther has a point: it’s no more convincing than in White Zombie (1932). But behind it is something more than sexual gratification and control, and I think if you look closely at Fosco’s character, at which men in this film are coded as gay, you’ll see something pretty interesting.

More reviews can be found at the Eleanor Parker blog, which has some terrific clippings about the film. I’m partial to the review that just rips off Shakespeare to fill out their minimum word count.

Long-time readers will know my modest obsession with Mark Rappaport’s 2009 Rouge article “The Secret Life of Objects,” where he reveals, among other things, the “elaborate ballroom set” on the MGM lot that was used pretty much every time the studio needed a “fancy” floor in a castle or mansion. But what I’ve noticed since then is that Warner Bros. films have the same floor, too, as does at least one Universal serial, The Phantom Creeps. A couple more examples: 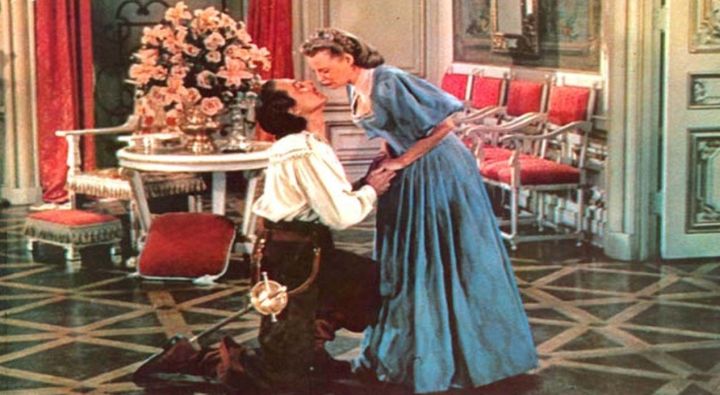 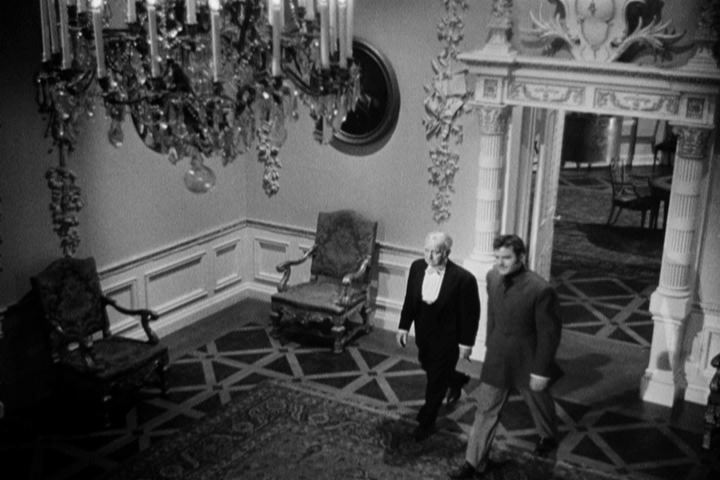 Warner Bros. The Woman in White

That’s the same floor, unquestionably, and I don’t think Warners would have been using MGM’s studio sets.  Just where was this ballroom, anyway? Who owned it and why did every studio in town rent it out?

The set for Woman in White was lush and beautiful, and Carl E. Guthrie’s cinematography is just fantastic. His work routinely elevated otherwise dull films, like my favorite wacky ’50s attempt to capture a hot cultural trend, Bop Girl Goes Calypso, and the solid B noir The Tattered Dress, and the film that was for a long time SBBN’s unofficial mascot, Girls in the Night, which I’m sure looked gorgeous when new, but now only exists in one sad and muddy old bootleg. 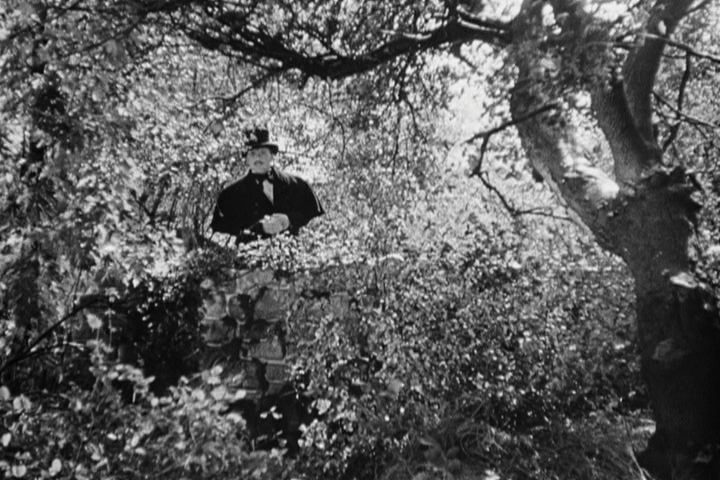 Cinematography also includes a little something that looks borrowed from Jacques Tourneur’s Out of the Past (1947), but was shot before Tourneur’s film went into production.

There’s a lot to love about The Woman in White, and I haven’t even gotten to Agnes Moorehead’s complicated role as the Countess Fosco, or Curt Bois’s silent but hilarious turn as Frederick’s beleaguered butler. You’d be hard pressed to find a Gothic mystery of this era more beautiful and more entertaining than The Woman in White.

The Woman in White is now out on MOD DVD from Warner Archive. Disk includes the film and the trailer. The print looks absolutely fantastic and the sound is crisp with very few anomalies.